The United States, if Michael Moore, 98% of non-Americans and countless political analysts are to be believed, is about to hurl itself, headfirst, down the most immense helter-skelter of f*ck-uppery. Our young cousins have entered a sort of puberty, characterised by vicious mood swings, existential dread and unsightly hair in unusual places (toupee or otherwise). Uncertainty is the order of the day, and as for what’s on offer next, we can only speculate. As such, there’s a newfound urgency to American travel. Time is running out for you to experience the United States of America, in all her great, pre- ‘great again’ spender.

Los Angeles is the most overrated place on the planet. Her sister city, however, is just the opposite. This costal linchpin of the Californian image is so much more than a bridge and a prison. What San Francisco manages to canvas is perfect urban eclecticism. Aesthetically, this is a pleasing city to gaze at from your equally awesome, vintage tram car. There is much to be done, and much on offer. But, on a sunny day, you’d absolutely be content with doing nothing at all. Eccentric architecture, unbridled street art, and rolling rural features pander to the raging hipster buried within us all. A perfect day in San Francisco is one spent roaming the web of costal tracks that sprawl the bay area. Procure a hotdog at Torpedo Wharf and ‘Do’ the Golden Gate Bridge thing, before rambling your way towards Fisherman’s wharf for a quality sea-front dinner and quirky shopping experience at Pier 39. 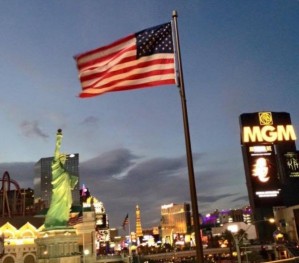 Las Vegas is not somewhere you’ll be wanting to spend any more than a couple of days. This is a city that, by its own admission (probably), lacks a compelling nucleus. Yet this fact is exactly what makes Vegas a city to be experienced. Put simply, Las Vegas is the epicentre of all American Stereotypes. A ludicrous place of incredible proportions, Vegas spouts complete, unadulterated weirdness from its street performers to its themed hotels. Having quenched the thirst of your inner hipster in San Francisco, indulge your outer sinner. That being said, you needn’t be reckless to make good of your time in this desert paradise. A small budget stretches far. Live, eat, drink like a king, for mere pennies. Just don’t linger. The longer you stay the further this mirage fades, and the reality, the desperation, the incessant clang of slot machines, actually begins to become quite depressing.

There are a total of two Trump properties in Washington DC. One, a converted post-office, represents a new addition to the Donald’s international chain of hotels. The other, a much more recent acquisition, and infinitely more interesting than the former, represents a major pull-factor for visitors to the seat of American power. The White House, Capitol Building and Pentagon are the obvious and unmissable lures of the US Capital. But, what few realise, is that all three can be toured by tourists – with varying degrees of difficulty. Further afield, Arlington National Cemetery, a site of immense proportions, is a sombre way to cap off an American vacation. The final resting place for over 350,000 war-fallen, presidents of years gone – including William Taft and John F. Kennedy – and many more notable figures, Arlington, and its spectacular panoramas of the Capital below, showcase the very best of America.

View all posts by jiffyposts