I awoke on the morning of July 11th to the bellowed tones of what I assume was the Chinese language. The racket of my neighbours easily punctured the paper-thin walls of my ten pounds a night room and forced me awake several hours early. I stayed put in bed for a while to writhe in pain and feel sorry for myself – I’d spent the last eleven or so hours on a plane, contorted awkwardly across a row of seats broken by three immovable armrests. I’d come from a brief stopover in the Saudi city of Jeddah, to the Southern megalopolis of Guangzhou, and I was exhausted.

The journey thus far had been a nightmare of logistical cock-ups and sleepless flights. I was tired, utterly demotivated, and confident that the month ahead would bring a succession of similar gaffes that would further affirm my inability to function at a basic level as a human being.

I was, then, envious of some of the others on the programme I’d connected with – urban explorers en route to Shanghai, Beijing, Hong Kong, and other cities within range of an airport shuttle or, at worst, a taxi. I’d been assigned to a small farming village near the moderately sized town of Yangshuo, to the northeast of Guangxi Autonomous Region. In hindsight, the trip was a simple one, and Yangshuo was far less a rural stereotype – it did have a McDonald’s, after all. But weeks of Google image trawling had led me to expect a Lord of the Rings calibre quest to a relatively obscure Chinese settlement, and my trouble with the London-Guangzhou or ‘easy’ leg of the journey sharpened my anxiety.

I muddled my way through a throng of rush hour commuters and into the bowels of Guangzhou’s public transport system; the city metro. It may be a claustrophobic unease, or just something in the filtered air, but every metro in the world has a curious propensity to elicit the worst of humanity, and Guangzhou was no different. After an hour or so of standing and struggling against reflexes to clutch at the nearest human for balance, as the train shuddered back and forth, I squeezed into a seat opposite a pair of doors. What followed was a theatre of the very worst and most sardonically comical face of humanity. Every stop was a contemporisation of a great battle. The train crept into station after station and two opposing forces were drawn parallel, divided not by the bare expanse of Hastings, nor the barbed wire of the Somme, but a pair of glass doors. In the seconds following, each veritable soldier glared terror into the eyes of his adversary, in anticipation of a bloody onslaught. The whistle blew and chaos ensued. Two divisions collided. The front line wavered quickly back and forth and the screams of the anguished filled the cabin. A drafted mother deployed a pushchair and rammed forwards towards the edge of the platform. She, like everybody else, shouted and heaved against the current of the rival swarm. Some showed mercy and parted to let her pass. Others – the opportunists, sensed the breach and rushed the gap, overwhelming the woman, who immediately vanished into the carnage. 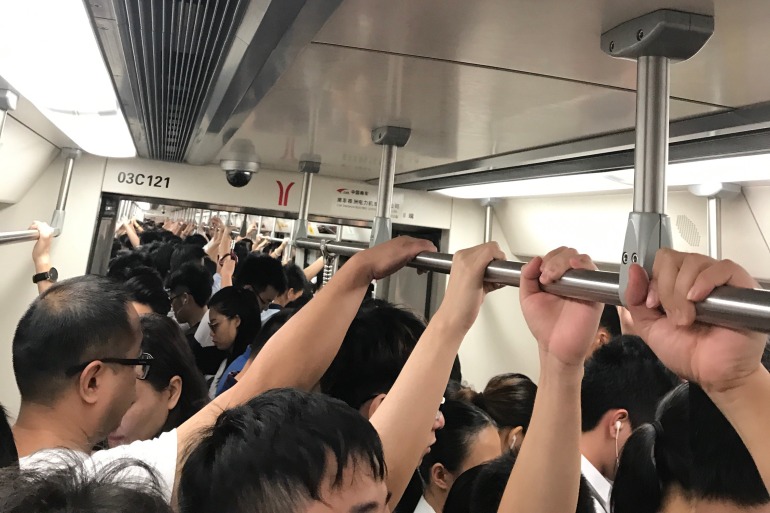 The chaos continued, stop by stop, for the entire ride. What had begun as objectively hilarious had actually become quite depressing. I was glad to finally reemerge into the civility of the surface, at Guangzhou South Railway Station. Bumbling about from tourist information centre to tourist information centre, I eventually found a ticket for the high-speed train at one twenty that afternoon. I complied with an utterly senseless security check that consisted of a doing-over with a hand-held metal detector which, despite bleeping loudly, seemed to have no bearing on the officer’s decision to let us pass swiftly by.

It had been a long, tedious morning and I was dying for something to eat. It was time for my first meal in China, and the sprawling pseudo-mall of Guangzhou station’s grand departure hall left me with no shortage of choice. Convenience stores proffered nondescript packaged meats and gift chocolates. Noodle bars were appealing but teaming with people, and I hadn’t the time or will to wander the length and breadth of the station for something else. As such, my first foray into authentic Asian cuisine consisted of a Zinger burger meal from KFC, and two extra chicken wings.

The colonel’s chicken stoked a smouldering fire and kept me functioning at minimum capacity, enabling me to blast through most of the many documents I’d been given to read in preparation during the train ride. I worked attentively, as two thirds of the Guangzhou-Yangshuo line offer nothing especially inspiring to gaze at. Mid-way through one of the few remaining booklets we emerged from a tunnel into the one third that absolutely was worth gawking at.

Googling ‘Yangshuo’ renders an infinite number of photos of one particular geographical abnormality: the town is flanked by a bizarre formation of peaks known as the karst. Characterised by steep, pointed peaks, the many karst formations, amongst which Yangshuo and surrounding villages sit, are the product of an abnormal geological composition and the same tectonic action responsible for the Himalayas. It’s a process that I don’t completely understand nor can really be bothered to recount. But rest assured, the magnificent formations you see in such photos are not the product of trick photography or effective positioning. The karst ranges are vast, imposing and just as captivating as you’d imagine.

Our pearl-white bullet train slid into Yangshuo station and I exited into a volcanic heat. Guangzhou had been hot, and quite humid, but this was something else entirely. It was the sort of heat that not only hit you in the face but kicked you in the balls for good measure. The stench of torched tar was hot in my nose and contributed to a sudden and unexpected overwhelming of the senses that left me drifting towards the exit like an incontinent zombie. It was tough, but I had arrived – more or less. I handed over whatever amount of Yuan was demanded of me and made straight for the air conditioned respite of a little blue minivan.

The next hour gave me my first glimpse of rural China and its dusty dirt roads. Outmoded, mid-century trucks chugged precariously from village to village, their engines and internal workings completely exposed, along unpaved, uneven roads. Farm houses were illuminated redundantly in broad daylight by imposing hammer and sickle fixtures centred above doorways, overshadowed occasionally by the imposing image of Mao Zedong, emblazoned on posters and the odd billboard. Yangshuo, a fairly touristy town, appeared far less nationalist, and perhaps had more in common with Guangzhou than some of its outlying villages. There were few overt references to the Chinese Communist Party – of the hammer and sickle light fixture sort, and vestiges of the Great Helmsman himself took the form of cheap tourist tat  – little red books, Mao wrist watches and lapel pins piled high atop gift stall tables. That brief journey from the rail station would be the most I saw of what I believe was ‘authentic’ nationalist China – outside of Beijing, of course. 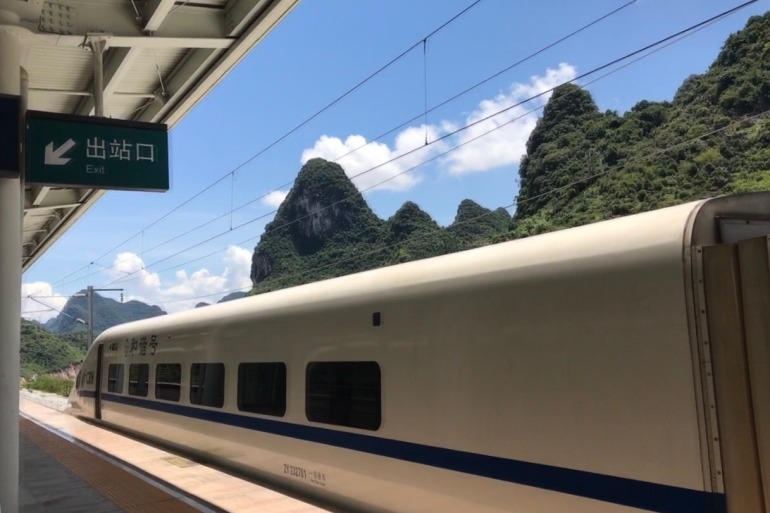 I had time to absorb and take note of what I’d seen at the bus station. It had started to rain so the school sent a man with a van to collect me. My liaison sent through a photo of the driver, a bespectacled Chinese man called Ken. Cars and bikes pulled up at the station to meet friends and relatives. I glanced at the picture each time, keeping a keen eye out for Ken. Eventually, an old people carrier came to a stop on the road parallel, and a narrow, waving arm emerged from the window. I recognised Ken’s image and dumped my bag into the back seat of his ride, before introducing myself as enthusiastically as I could (I’d been a little afraid of appearing to lack a teacher’s energy, so sought to paint myself as an extrovert). I made every attempt to engage Ken in conversation accordingly, with little success. “My English”, he told me, “is not so good”. So instead we spent the duration of our 15 minute journey in silence – if not for the pinging of rain on the vehicle’s roof.

It was around five in the afternoon and we’d hit rush hour traffic. We paced quickly along a high street before being funnelled into a tunnel bored directly through the middle of one of the karst mountains. We spent some time in the dark of the underpass, with rush hour congestion rendering the narrow tunnel clogged like a fatty artery. Eventually we emerged and the traffic thinned. We whisked through, around and in between mountains and twisted left and right abruptly to avoid mopeds and bikes. Fields and farms gave way to tall concrete buildings, and the car banked left onto a small, sloped access road wedged between a shop and a small patch of cropland. An aged security guard drew open a large iron gate ahead and we pulled inside. The car  slowed to a stop and Ken shut off the engine. I heaved my bag and myself out of the car and was met with the beaming grin of a small, stout Asian woman. “Hello, welcome”, she said.

View all posts by jiffyposts