The journey from Guilin had been exhausting, emotionally and physically. Myself, Max and Charlotte arrived into Hong Kong late in the evening. It was long after sunset, but for all the neon glow of billboards and store signs you really wouldn’t know it.

Our minds dragged from the stress of a day’s travel, and shoulders pained with luggage overstuffed with the weight of memorabilia and the less-meaningful tat we’d accumulated over the past month. After a brief wander around Victoria Park, we regressed to our hostel to nourish ourselves with the first VPN free WIFI we could find, and send messages, photos and videos to the friends we’d left behind, letting them know we’d arrived safely, finally.

The neon glow and evening rush had stirred an electric aura, a latent, urban energy that had been lost on us that night, and was one we struggled to relocate the following morning. The eye-watering glare of the countless displays and signs of night had been replaced by an intense, squint-inducing sun, and a searing heat which caused me to regret my lack of factor 50– just not enough to move me to pay the 50 or so Hong Kong Dollars to pick up a new tube. Perhaps it was the heat, but the streets were all but bare, and the energy of night had been traded for quiet, bar the mechanical rattling of the odd tram along thoroughfares.

We wandered for a while, in no particular direction, guided by signposts and an offline map on Charlotte’s phone (we were too knackered the night before to cobble together a plan of action). Instead, we cut our way slowly through a thick curtain of heat until we’d reached the promenade – an immaculate waterfront composed of malls, museums, ferry ports and a large, white Ferris wheel. We shot some obligatory selfies at the equally serene riverside before stumbling into a Maritime museum, which was fortunate, for three history nerds. The museum was a protected but in no way fictional account of the ravages levelled against both Hong Kong and China at the hands of foreign powers, encapsulated in the following reflective, if not a little understated line from an instalment on the Opium Wars: “The British addiction to tea proved to have powerful consequences all over the world”.

By the time we’d meandered through the museum’s special and highly critical exhibit on shark hunting and shark fin soup, we were hungry – albeit for something distinctly other than shark fin soup. We’d heard much of Dim Sim, the Cantonese cuisine, and had been recommended a particular restaurant by our friends in Yangsuo. Tim Ho Wan’s was a bitch of a place to find. With no WIFI to speak of we were relying again on Charlotte’s handy but not entirely accurate set of offline maps, which had put us off course and steered us into a pet shop.

A defeated taxi ride later and we found ourselves back on track, waiting outside Tim Ho Wan’s with a ticket stub for some 20 minutes, before being ushered inside and into a freshly opened up table along with a sun-wrinkled old man. The place worked with an industrial efficiency, and in a matter of minutes we’d checked four or so dishes each on our order cards, which were swiftly whisked away by the waitress.

Food arrived, and I put down my phone and stopped trying to inconspicuously take a photo of the Asian manifestation of Bill Clinton sitting at the table opposite (see photo below). Dim Sum, dish by dish, was laid out before us, along with a large jug of sweet tea. I hadn’t given much thought to the orders I’d made, but whatever they were, they were delicious. We traded samples among the three of us, while the old man at our table slurped at tea and flung meat-stripped bone after meat stripped bone down onto the table. He devoured his dishes quickly – it seemed the pace of service was a component of a two-way deal: if the restaurant was to run like clockwork, then so should the customer. Within 10 minutes he was gone, his seat at our table taken almost immediately by an American twenty-something who, naturally, was quite a bit more talkative.

Jodie, a vegan, found Tim Ho Wan’s selection to be disappointing, given the place’s apparent reputation as the very best of Cantonese cuisine. Not able to indulge in the staples – pork dumplings, duck pancakes and the like, she settled on a variety of terrible vegetable dishes. She shared the plated terror with the three of us, and traded stories about our time in Yangshuo and her time in India and Los Angles, her home. Max spoke with her about India, and I spoke a little about my few brief days in her city, feigning nostalgia, “oh yeah, I love LA”, I muttered, or something similar. “But you said you hated LA?”, Max prompted, thoughtfully.

We waited for the American to polish off the last of her vegetables while enduring displeasing looks from the restaurant’s staff, as we’d probably lingered long enough to throw a spanner into the place’s clockwork mechanism. Jodie lingered for a further half hour or so, as we settled our stomachs with an amble through a small indoor market. Before long, we parted ways and headed for Victoria Peak – a mountain capped with a viewing platform, where we’d watch the sunset and witness the city burst once more into luminant life. We traded WhatsApp info with her and agreed to meet again, but the friendships travellers foster are often fleeting, and so that was the last we saw of Jodie.

A double decker bus pulled us slowly up the face of Victoria Peak, its engine groaned above the occasional awe-struck gasps of passengers, as gaps in the foliage revealed a rapidly sinking cityscape. It was a public bus, not one especially charted for tourists, but a city-administered public transport, just like any other. Amongst the passengers were tourists, sure, but also exhausted mothers, pushing children in prams, and men with arms grasping at multiple grocery bags, here to be shuttled home to the grand houses and distinctive apartment blocks dotted on roads which wound the mountain. This made for a peculiar passenger composition, compelled by a surprisingly high degree of development on the incline. The place reminded me much of Beverly Hills, only one much steeper, but with quite the same level of ostentation.

We spent a good few hours at the viewing platform at the very tip of the mountain, chatting and reflecting as the sun sunk below the forested horizon to our rear, and the city before us burst into artificial light. We took our time in that special place, that special moment, before descending from the platform. 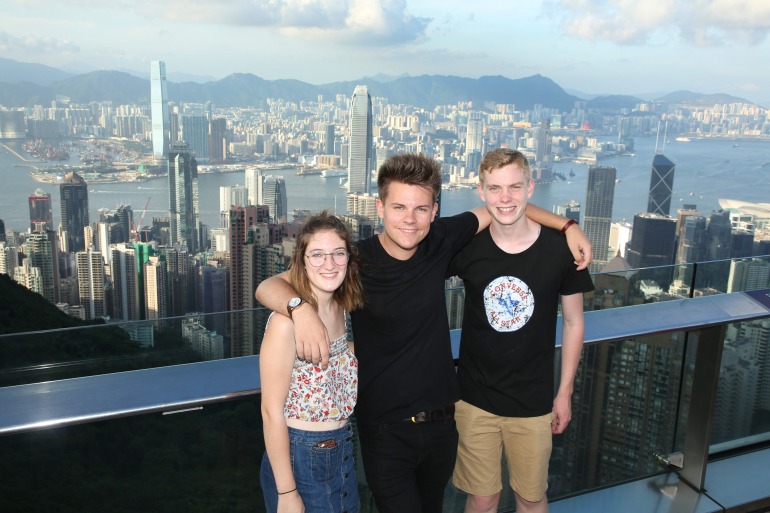 The descent back into the city was slow, and by the time we’d reached the night market in the bustling Mongkok district – our final stop of the day, I was pooped. Sifting through ceaselessly dense crowds wasn’t quite as exhausting being screamed at by a stall owner for trying on a pair of sunglasses. ‘How the shit do you expect me to pay for glasses you won’t let me try on?’, I challenged, internally. We moved from stall to stall, actively seeking out the most ridiculously apparent knock-offs of Rolex watches, Hugo Boss shirts and Calvin Klein underwear we could find. But the three of us were now utterly depleted, right at the moment the city had blossomed into vibrancy.

Defeated again by Hong Kong’s effervescent night-time aura, we retreated to the hostel in preparation for another early start the following morning. I took the elevator to my room on the 6th floor, which I shared with 9 others. My room key bleeped the door open, and I crept in to find my roommates all asleep. I took my towel and slinked out onto the balcony, laying it over the wall at the edge and perching myself on top. I thumbed my phone for an appropriate playlist, opened a warm beer and basked in the dark amongst a dense cluster of narrow, high-rise buildings, contemplating the silhouette of a lone man at a window, drinking from a bottle behind a distant, yellow light. 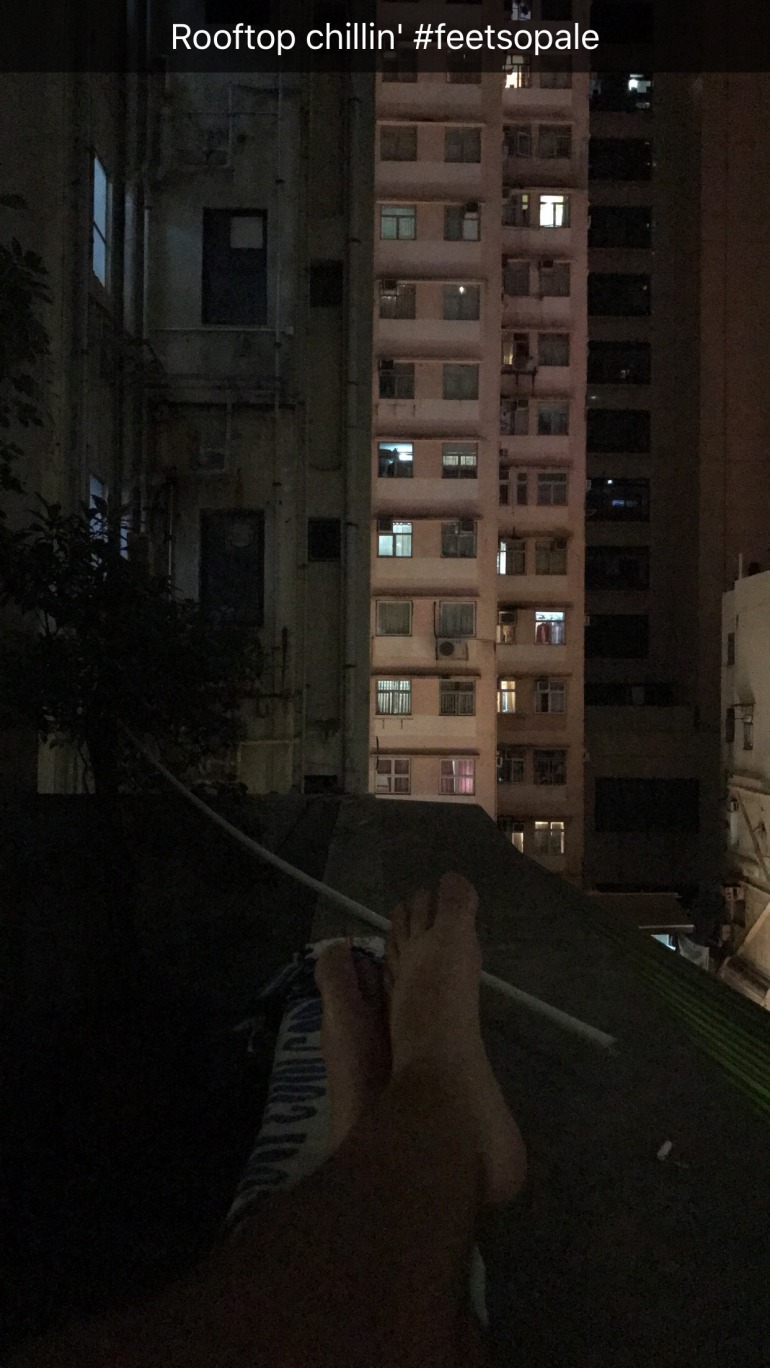